The latest blockbuster exhibition at the National Gallery, Beyond Caravaggio explores the extraordinary influence of the Italian painter Michelangelo Merisi da Caravaggio on a whole generation of artists across Europe.

Mad, bad and above all a genius, Caravaggio’s art was truly revolutionary. Through his use of naturalism and dramatic lighting effects, he changed the course of European painting and remains a source of inspiration for artists, photographers and directors alike to this day.

To celebrate the launch of Beyond Caravaggio and our exclusive Caravaggio competition, we’ve taken a series of still lifes inspired by paintings featured in the exhibition with the National Gallery’s Curatorial Assistant, Francesca Whitlum-Cooper providing insight into his life and work.

“Caravaggio was born in Lombardy in 1571 and probably moved to Rome at about the age of 20. His first independent paintings were highly original, depicting youthful boys alongside beautiful and extremely realistic still lifes. At the time, Still life was seen as a very humble form of painting, but Caravaggio insisted that it required just as much skill – “tanta manufattura” – as painting figures.”

“In the National Gallery’s Boy bitten by a Lizard, the lizard clinging to the boy’s finger has been hiding amongst the sumptuous cherries and leafy foliage. Caravaggio has lavished huge attention on this still life, especially the dazzling reflections of light in the vase of water. Already we see Caravaggio using the strong directional light, for which he is now celebrated, to enhance the drama of his picture.” 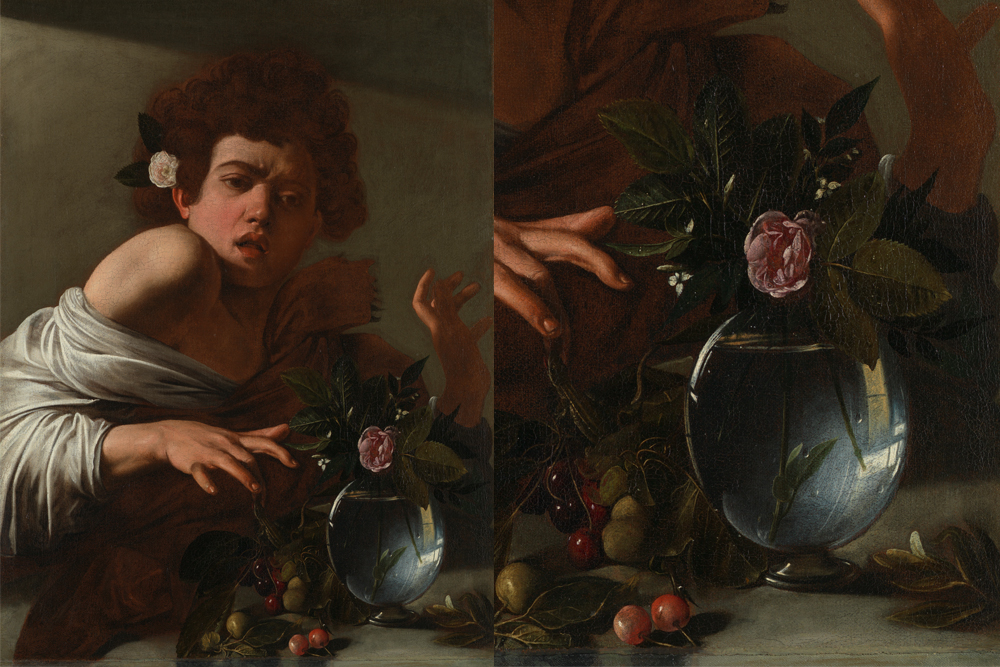 “Part of the charm of Caravaggio’s still lifes is their element of seduction. The cherries look good enough to eat, the carafe as if it would be cool to the touch. Caravaggio draws us into his paintings with astonishing illusionism by painting figures at the height of the action in freeze-frame poses that feel almost cinematic – their hands and elbows jutting towards the viewer’s space.

In The Supper at Emmaus (The National Gallery, London) a basket of fruit teeters at the edge of the table, threatening to fall towards us – we, as viewers, want to nudge it back to safety!” 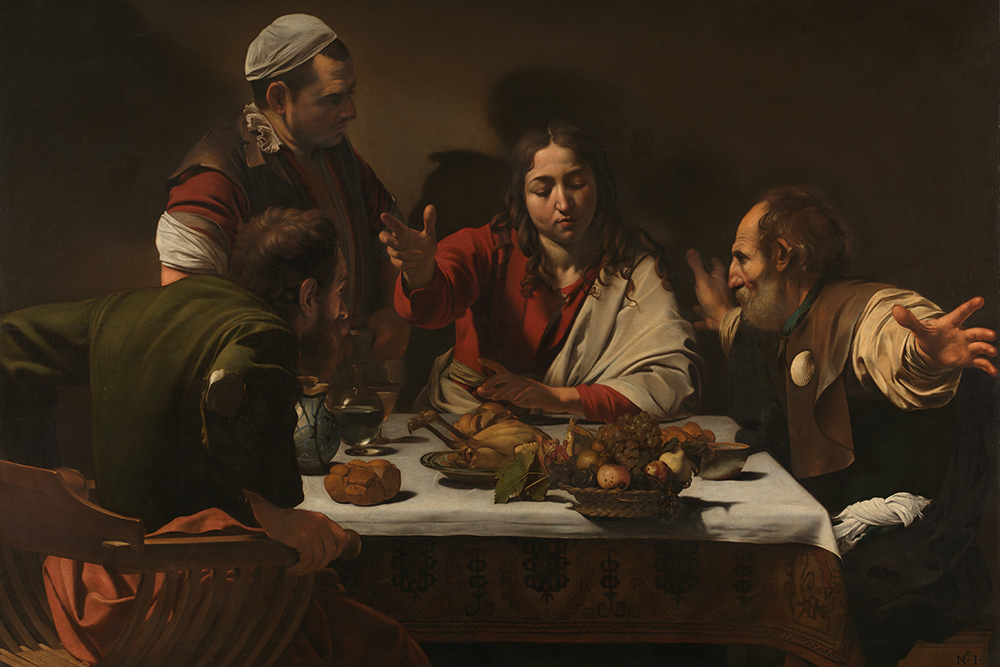 Caravaggio, The Supper at Emmaus, 1601 (The National Gallery, London)

“Heal’s captures this perfectly in their rendition of the still life from the Supper at Emmaus, their basket of fruit just hanging over the edge of the wooden table. Our eyes are drawn to the beautiful reflective surfaces of the glass and decanters; the pleasing roundness of the pestle and mortar and vase; and to the crisp white of the crumpled linen cloth.

We know from scientific analysis that one of the only elements Caravaggio changed in the Supper at Emmaus was the expanse of tablecloth in the lower right corner of the painting: originally the disciple’s thigh was placed in front of the tablecloth, but Caravaggio changed this, allowing our eyes to drink in the exquisite details of his table undisturbed and to enhance the protrusion of the basket.”

“Still lifes were very novel in Rome when Caravaggio first introduced them, but other artists soon began to incorporate striking still-life elements into their work. Cecco del Caravaggio was Caravaggio’s friend, model, companion, and perhaps even his lover. His Interior with a Young Man holding a Recorder (The Ashmolean Museum, Oxford) is packed with cheese, fruit, kitchen utensils and glassware. As in the Heal’s still life, these velvety peaches and succulent figs seem to beg to be picked up. In both the painting and the photograph, the table is set at our height, temptingly offering up its wares.”

“But it was not only those artists who knew Caravaggio personally who drew on his still lifes. Hendrick ter Brugghen was a Dutch artist who probably encountered Caravaggio’s work during a visit to Rome. Ter Brugghen spent most of his career in Utrecht, where he and other Dutch artists took Caravaggio’s dramatic lighting effects to new extremes, developing the genre of candlelight paintings.” 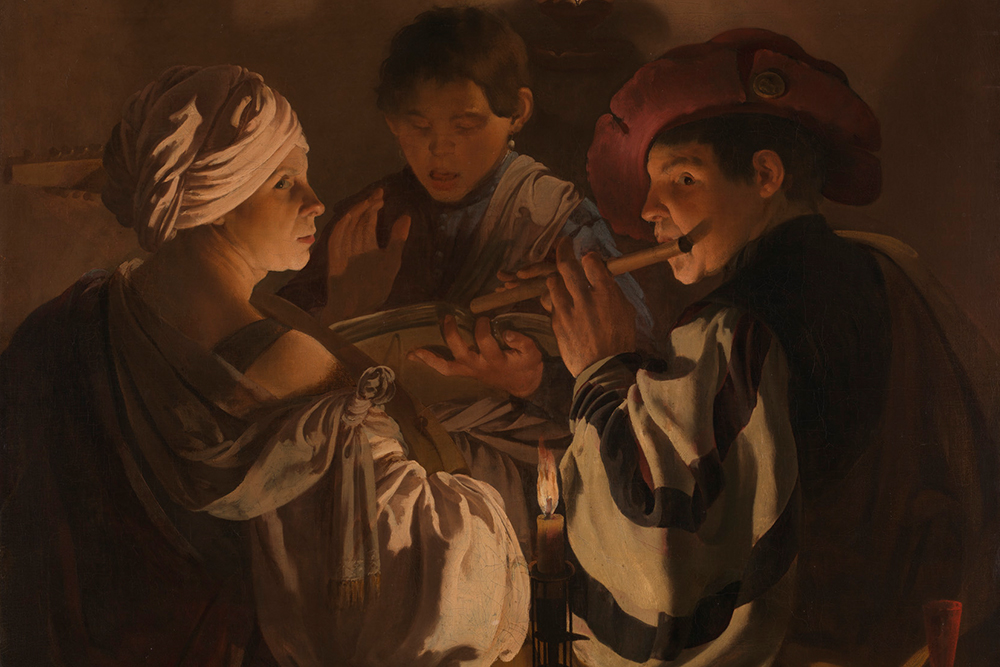 “In The Concert, three figures gather to play music and sing by candlelight. The mood is intimate and relaxed, the candlelight flickering beautifully over their faces and costumes. In many ways, this painting is very much beyond Caravaggio – a painting as much about the effects of light as the simple pleasures of music – but the glass of wine and grapes in the foreground hark back to Caravaggio, inviting us not only to admire their shimmering textures, but also, perhaps, to sample the fruit and join the scene.”

“Heal’s evoke the same mood in their nocturnal photograph: the casually laid down pipe and magnifying glass posed on the book suggest a similarly intimate moment that we ourselves might join.”

Caravaggio’s influence was widespread and diverse. From 1600, artists from across Europe flocked to Rome to see his work, and many went on to imitate his naturalism and dramatic lighting effects – these included artists as talented and varied as Gentileschi, Boulogne, Ribera and Honthorst. Today he is admired for his unforgettable imagery, inventiveness, and astonishing modernity by artists, photographers, and filmmakers alike.

For your chance to win two tickets to Beyond Caravaggio at the National Gallery, a private introduction from a member of the curatorial team, a dinner for two at Polpetto, the jewel-box Soho restaurant from POLPO with sharing plates, Venetian influences, Spritz and Prosecco, and a Tolomeo Micro Table Light enter our exclusive photography competition.

To enter simply take a photo on any device inspired by Caravaggio’s dramatic use of lighting and share on Instagram including the hashtag #BeyondCaravaggioToday. Entries to the competition will be accepted until midnight on Thursday 15 of January.

Beyond Caravaggio is on at the National Gallery until 15 January 2017. To find out more and to book tickets visit www.nationalgallery.org.uk/whats-on/exhibitions/beyond-caravaggio

3 thoughts on “Heal’s goes Beyond Caravaggio”